Jeet Kune Do is the name for the martial concepts and philosophy developed by the late Bruce Lee and friend/protégé sifu Dan Inosanto.  J.K.D. is a highly effective way of developing the physical and mental attributes needed for street/reality based fighting and self-defense.  JKD is very scientific, practical, simple and direct in its approach.  What are attributes to a martial artist? Attributes are what make technical knowledge work in real self-defense and fighting situations. Some examples of attributes would be speed, power, timing, endurance, spatial relationship, sensitivity, killer instinct, body mechanics, technical knowledge, balance, flexibility, composure, experience, proper mental attitude, etc….. 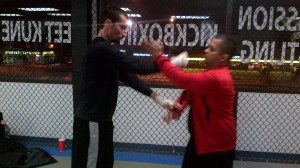 ” JKD is like an iceberg.  The tip is technique, while lurking below the surface is the great mass of the berg, which represents attributes.  Any experienced seaman well knows, it’s the hidden mass of an iceberg that constitutes the greatest danger! “

Jeet Kune Do practitioners learn to be proficient in every range of combat, and to successfully flow from one range to another. The nature of the flow is dictated by the circumstance or environment of the conflict. These ranges are:

J.K.D. also requires understanding all aspects of WEAPONS TRAINING and defence. Let’s face it, we’re talking about street fighting and reality based combat. You have to expect all the possibilities and train for them.  Facing weapons is definitely a huge probability on the street.  A confrontation can happen anywhere at any time; a crowded bar, an open parking lot, seated in a car, on icy ground in winter or perhaps inside an elevator.  What if there are multiple attackers?  What would you do when faced with a weapon like a knife, bottle, machete or a gun?  When you realistically look at street level combat, you come to a self-realization of what’s integral to your survival of any possible scenario and how to train yourself and your body to successfully deal with them…  What’s integral is proper education and an ability to adapt to all potential scenarios that you may encounter.

Bruce Lee researched 27 different martial arts during his lifetime to determine his “TRUTH TO THE ULTIMATE REALITY OF COMBAT”. Wing Chun being the nucleus, he did not discriminate against other styles of fighting or cultural origins, but rather realized everything had something to offer whether it was training methods or techniques, concepts or philosophies. Such arts include Boxing, Savate, Muay Thai Kickboxing, Fencing, Jiu-Jitsu, Judo, Greco/ Freestyle and Catch Wrestling, Sambo, Tai-Chi, Praying Mantis, and more. Dan Inosanto’s addition over the years was the Filipino arts in Kali, Indonesian Silat, a deeper understanding into Muay-Thai and grappling arts such as Brazilian Jiu-Jitsu and Shooto. It was more important to understand the strengths and weaknesses of each and to borrow from the different styles anything that relates to the realities of combat with intercepting and simplicity becoming the ultimate goal.   Sifu Bruce Lee would say:

“ABSORB WHATS USEFULL, REJECT WHAT’S USELESS, AND ADD SPECIFICALLY WHAT IS YOUR OWN”. 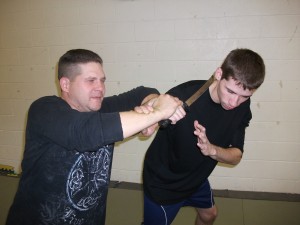 Jeet Kune Do is not only the art of war, but also the art of peace. Being a true art, it allows practitioners to develop and express there own truths towards combat based on their experience and abilities. It is a prescription towards personal growth and can be a lifelong pursuit for individuals to reach the highest levels of skill and discipline their potential will allow them to be.